Start a Wiki
watch 02:21
The Loop (Games)
Do you like this video?
AtomicShadow might actually be evil.
Properties
This item never drops any seeds.
This item cannot be dropped or traded.
Data

The Atomic Shadow Scythe was AtomicShadow's mod item but was released to the public as part of Player Appreciation Week 2018. It's a hand item, which when equipped, it gives the Enhanced Breaking Mod, like the Pickaxe and the Cybernetic Arm, which will make the punches stronger. 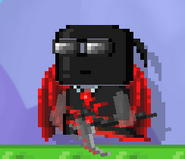 A player with the Atomic Shadow Scythe
Add a photo to this gallery
Retrieved from "https://growtopia.fandom.com/wiki/Atomic_Shadow_Scythe?oldid=161820"
Community content is available under CC-BY-SA unless otherwise noted.