View source
watch 02:58
No Man's Sky Update - The Loop
Do you like this video?
Play Sound

This amazing octohedron can actually contain two Battle Pets, primed and ready to strike. Unequip and re-equip to swap pet is active. Wrench a Battle Cage to load a pet into the Leash. Wrench another player with a Battle Leash to battle them! You must have 2 pets in the Battle Leash to battle.
Properties
This item never drops any seeds.
This item has special properties you can adjust with the Wrench.
This item can be transmuted.
Data

The Battle Leash is a splicable pet hand item which was added as part of the Pet Battles update on June 11, 2016.

A Battle Leash can hold two sets of battle pets, each with three pet abilities. The player can swap between the two sets by unequipping and reequipping their Battle Leash. 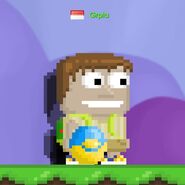 A player with a Battle Leash equipped
Bahasa Indonesia
Community content is available under CC-BY-SA unless otherwise noted.
Advertisement