Careful with these, they'll stain! Throw it at a player to turn him blue for an hour.
Properties
None
Data

The Blueberry is a splicable consumable item introduced since the beginning of the game.

When consumed, it gives the Feelin' Blue mod which turns the player's skin blue for one hour.

Apart from being consumed, they can be fed to a Silkworm to give it a blue color. Blueberries can also be used in various cooking recipes. They take around 9-10 seconds to cook perfectly. 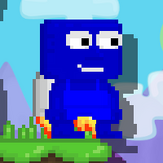 A player with a Jetpack and a Blueberry in effect

The Feelin' Blue mod and the Saucy! mod active at the same time.

The Feelin' Blue mod and the Egged! mod active at the same time
Add a photo to this gallery
Retrieved from "https://growtopia.fandom.com/wiki/Blueberry?oldid=187690"
Community content is available under CC-BY-SA unless otherwise noted.