"Punch me!"
This is an NPC, or a non-player character.

The Boss Ghost is an NPC which was added as part of the B.O.O. update. To summon the boss, the player must complete the Dark Spirit Board's riddles, although one can also be spawned randomly in a previously made world that hasn't been locked yet during the monthly Ghost Day, with a message saying "A Boss Ghost is haunting the abandoned plains of Growtopia!". To kill the boss, players must equip a Neutron Pack, Neutron Gun, and Spectral Goggles & trap inside of several Containment Field Power Nodes (these will need to be powered by using Ghost-In-A-Jars). The boss has around 60,000 HP and will only be present in a world for 20 minutes!

In order to successfully defeat the Boss Ghost, the player must bring plenty of Ghost-In-A-Jars to put into Containment Field Power Nodes. Before summoning the boss, place at least four nodes into a square formation around the Dark Spirit Board. The farther away each node is placed from each other, the better. This will ensure that the boss gets trapped inside. It is also recommended to place a Checkpoint somewhere around the nodes, as players will often cross their beams.

To activate the nodes, simply click them with a jar selected. Once the nodes are placed and active, gather up several friends and complete the spirit board's riddle. Once the boss is spawned, attack it with a Neutron Gun while equipping a Spectral Goggles and a Neutron Pack until it is defeated. Upon defeating the boss ghost, the player will receive one Boss Goo, or two if the player used the EctoJuicer. 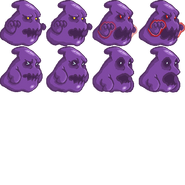 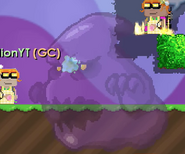 A Boss Ghost in a world.
Add a photo to this gallery
Retrieved from "https://growtopia.fandom.com/wiki/Boss_Ghost?oldid=167566"
Community content is available under CC-BY-SA unless otherwise noted.