Carnival is a 3-day event which takes place on a random Friday every month where players can play a wide variety of minigames, as well as complete a quest in order to obtain a ring from the Ringmaster. The event can be accessed in the worlds CARNIVAL1–CARNIVAL50 (previously CARNIVAL1–CARNIVAL150, but was later reduced).

The original Carnival update was introduced on October 13, 2014. It added four games—Concentration, Growganoth Gulch, Mirror Maze, and Shooting Gallery—and four rings—Fistful Of Rings, Ring Of Force, Ring Of Winds, and The One Ring. A side attraction called the Bouncy House was also introduced, which didn't come with any prize.

Death Race 5000 was introduced in WinterFest 2014, which began on December 19, 2014. Prizes include Carnival Pipe, Tiny Tank, and Edvoid's Fire-Nado.

Jester's Cap, the very first Mystery Prize, was added as part of Player Appreciation Week 2015. The second one, Licorice Rod, was added alongside the Fishin' Pack on September 11, 2015.

The Stuff! update, which was released on October 1, 2018, introduced the Spiky Survivor game. Prizes include Carnival Ladders, Dragon Block, and Ethereal Rainbow Dragon.

A prize will be awarded if the player is able to complete the minigame within the time limit. Prizes are ranked from common to rare to ultimate, Ultimate Prize being the rarest and most valuable of the three prizes. Mystery Prizes may also be given randomly from playing any of the games. Prizes are awarded by luck and do not reflect the time spent playing the minigame. Winning 50 CARNIVAL games will give a Funtime Block.

The Ring Of Savings is a prize that players obtain when they rank in the top three in the Carnie Contest Daily Challenge. With this ring equipped, one can save 10% on Golden Tickets (pay 90 rarity per ticket, or get 33 per World Lock).

Mystery Prizes may be randomly earned from any Carnival game. Some of the prizes are comparably rarer to the others.

These blocks are technical items which aid the running of The Carnival and are not actually obtainable to regular players. 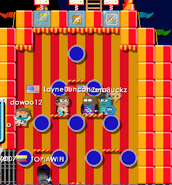 Multiple players entered into minigames when IDs were leaked.
Community content is available under CC-BY-SA unless otherwise noted.
Advertisement