The Crystal Block is an unsplicable solid foreground block.

Below is a list of trees which can possibly be made by splicing a Crystal Block Seed with another seed.

Combining a Robotic Lock, a Transmog Crystal, and 20 Crystal Block in any Chemical Combiner will give a dropped Diamond Lock.

Breaking a gem block, such as a Crystal Block, has a chance to drop a Celestial Dust.

The design update announcement in the Growtopia Gazette 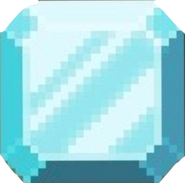 Meow's suggested design for a Diamond Block, which was modified into the Crystal Block's new design instead
Add a photo to this gallery
Retrieved from "https://growtopia.fandom.com/wiki/Crystal_Block?oldid=184764"
Community content is available under CC-BY-SA unless otherwise noted.