This rock seems to have a fossil embedded in it. Maybe you could crack it loose if you tap very carefully with a Rock Hammer. There is a rumor, as old as time itself, that having a busy world will generate more Fossil Rock. The Growtopia Archaeological Society have officially announced that this is totally untrue. Time to bury that rumor, once and for all!
Properties
This item never drops any seeds.
DataPaint Preview

The Deep Fossil Rock is an unsplicable solid foreground block which was added as part of the Growassic Park update.

The item spawns in popular worlds in the place of a Deep Rock; the more popular a world is, the more likely a Deep Fossil Rock may spawn.

A Deep Fossil Rock should be punched using a Rock Hammer until the fossil has been unearthed, followed by a Rock Chisel until it breaks, dropping a Fossil. Using a Fossil Brush on the dropped Fossil will give a Polished Fossil. 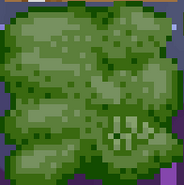