Start a Wiki
watch 02:27
The Loop (Games)
Do you like this video?
Donation Box
Properties
This item has special properties you can adjust with the Wrench.
DataPaint Preview

The tree of this item can be made by mixing the following seeds:

The Donation Box will only allow 20 gifts, once its full, no one can donate until a player has emptied the box.

When putting in items in your Donation Box, it will say "Choose items to give yourself"

"You see N gifts in the box! You've already crammed 3 of your gifts into the box,better wait." 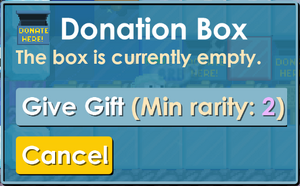 Retrieved from "https://growtopia.fandom.com/wiki/Donation_Box?oldid=107586"
Community content is available under CC-BY-SA unless otherwise noted.