View source
watch 02:56
Raise a Floppa - The Loop
Do you like this video?
Play Sound

@Dr. Destructo is an NPC who appears during a Special Event where players in the world are required to defeat him by punching him. Dr. Destructo has a Destructo Ray where when players are hit with it, they are frozen for a few seconds. He also has the ability to spawn Public Lava around the world which acts like regular Lava, except it can be broken by all players. A health bar will appear, displaying his health, which reduces as he gets punched, but, he has the ability to regenerate if not kept under attack. He is also a villain randomly spawned by consuming a Crime Wave.

When Dr. Destructo has been defeated, everybody in the world will receive the Superhero achievement. 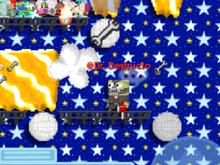 Dr. Destructo in a special event.