Fire is a special element which exists on a layer above foreground blocks, similar to Water. It was added as part of the Firefighter update.

While a Fire can spread to the other blocks, there is a limit of 150 Fire per world. it. Fire does not destroy any block, apart from the Highly Combustible Box. However, players can be harmed by Fire, which burn them similarly to how Lava work.

A Fire Hose, Water Balloon, or a Water Bucket can be used to put a Fire out. When placed in a world, a Firehouse will start putting out Fire on a moderate pace. 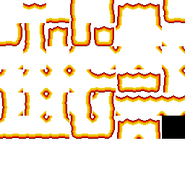 The textures of Fire

A group of connecting Fire.
Add a photo to this gallery
Retrieved from "https://growtopia.fandom.com/wiki/Fire?oldid=179286"
Community content is available under CC-BY-SA unless otherwise noted.