Fish can swim around in here! However, you need to put them in through a Fish Tank Port, sold separately.
Properties
None
DataPaint Preview

Fish Tank is a splicable background which was added on 11 September 2015 during the Fishin' Pack Update. 10 of them can also be obtained from the Fishin' Pack pack for 10,000 gems. It is used to store fish which may be inserted or removed via a Fish Tank Port.

Fish Tanks with Goldfish in it. 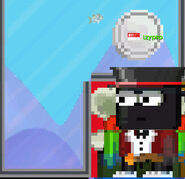 Fish Tanks with a 7lb Bass inside.
Add a photo to this gallery

Retrieved from "https://growtopia.fandom.com/wiki/Fish_Tank?oldid=193462"
Community content is available under CC-BY-SA unless otherwise noted.