It would be dangerous to throw this on someone, not to mention downright rude!
Properties
This item never drops any seeds.
Data

The g-Virus is an unsplicable consumable which was added alongside the Zombie Defense Pack on May 17, 2013.

When consumed on a player, the g-Virus grants the player the Infected! mod, which transforms the player into a zombie. This direct infection ignores the immunity granted by an Antidote or the Zombie Jammer. When another player gets punched by the zombie, the former also becomes a zombie themselves.

When an infected player chats, their message appears in dark green, with "Zombie speak" added on occasion, such as "BRAINS!" or "Brraaiinnss...". The zombie speak originally extended vowels and alternated capitalization randomly, but that was cut so chatting as a zombie would be less annoying to players. 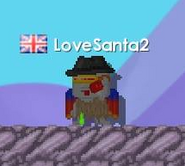 A player who has been infected and has been cursed

A player who has been infected
Community content is available under CC-BY-SA unless otherwise noted.
Advertisement