View source
watch 02:53
GTA: The Criminal Enterprises - The Loop
Do you like this video?
Play Sound

With this handy device, you can detect radiation. As you get closer to the source, the device will ping red, then yellow, then green for the closest. Stand still where you think the source is and you just might find it!
Properties
This item never drops any seeds.
Data

The Geiger Counter is an unsplicable hand item. One can be purchased from the Store for 25,000 Gems.

When equipped, it grants the player the Geiger Counting mod. The item may emit one of these types of signal rings which tell how far the player is from the source of radioactive point in the world:

Once the player stands for a few moments on the source of radioactivity, the item they found will be added into their inventory. If the player's inventory is full, the item will be dropped on the tile they are standing. The player will then receive the Irradiated mod for 30 minutes (15 minutes on Geiger Day) and their Geiger Counter will turn into a Dead Geiger Counter.

The list of all possible rewards can be seen below.

The message which appears when a player manages to find a radioactive item. 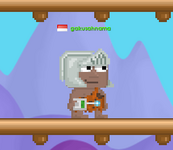 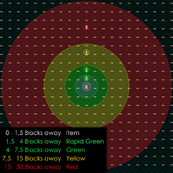 An image showing the areas of different signal colors around the source.
Bahasa Indonesia
Community content is available under CC-BY-SA unless otherwise noted.
Advertisement