View source
watch 02:17
New Pokemon Games - The Loop
Do you like this video?
Play Sound

A Ghost is an NPC which inhabits haunted worlds (worlds which haven't been visited for a long time). They were added as part of the Battlers Of the Otherworldly update.

Ghosts spawn in a world which has not been visited for a long time. They can spawn in any world, with the exception of worlds with Ghost Charms placed in them. A limit of 25 ghosts can be spawned in a world.

A Ghost flies around mindlessly. One is able to see it by equipping a Spectral Goggles or Synthetic Oculum. It, however, moves towards a player with a Neutron Gun and a Neutron Pack whose punch is in its way.

Ghosts can grant particular mods to players upon colliding with them unless they are wearing special items, such as the Rubber Boots. When a Ghost comes in contact with the rings of a placed Ghost Jar, the Ghost will be sucked in and disappear alongside the jar. Depending on its type, a Ghost-In-A-Jar,Mind-Ghost-In-A-Jar or an Ancestor Mooncake will then appear in one's backpack.

The textures of Ghost variants

A Ghost haunting a world.

A Ghost of Winterfest Past haunting a world.

A player being killed by a Ghost Shark. 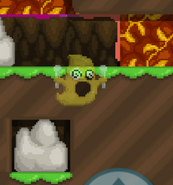 A Mind Ghost in a world.

A WinterFest Ghost.
Community content is available under CC-BY-SA unless otherwise noted.
Advertisement