View source
watch 02:46
The Quarry - The Loop
Do you like this video?
Play Sound

"The Growch has a teeny tiny black heart. He hates giving, kindness, and holidays. Maybe, if we all give him Winter Gifts... he'll learn what the holidays are all about. Plus, he might give us some stuff in return, so rock on."

As of WinterFest 2015, a parkour section has been added above the Growch. Once completed, the player may either choose to go to the Icy Heart Pickup, which will reward them with an Icy Heart Of Winter as long as they haven't already had one in their inventory, or visit the Nutcracker to purchase some exclusive items in exchange for World Locks.

Several Giving Trees can be found surrounding the Growch. Players are able to chop them down with a Lumber Axe to obtain the trees themselves, leaving Giving Tree Stumps behind. These stumps may regenerate back into Giving Trees after some while.

Message when giving the Growch a Winter Gift

The Growch declining a Winter Gift 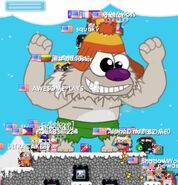 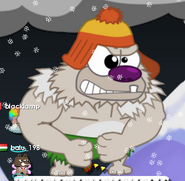 GROWCH, as seen during Night of the Comet