This is a page featuring information and guides about surgery.

Surgery is a feature in Growtopia that allows players to perform various types of surgeries on other players using various tools. It was first introduced in the Growtopia General Hospital update on November 21, 2013. It introduced a surgical pack costing 7,000 gems consisting of seven tools, namely, Surgical Sponge, Surgical Scalpel, Surgical Antibiotics, Surgical Stitches, Surgical Splint, Surgical Antiseptic and Surgical Anesthetic each with its unique ability when performing a surgery.

On June 13, 2019, during the Blocktor's Orders! update, x10 Med-A-Check and a Train-E was added to the pack. In addition, it introduced 'maladies' and the Dr. title, rewarded for successfully performing surgery 5,000 times (excluding on Train-E).

The Surgical Kit, which contains 5 of all the needed tools, is available in the Store for 12,000 gems. It also provides a Train-E, a Heart Monitor and a Hospital Bed.

The following are the tools needed in performing a surgery. Carrying every single tool is not a requirement to complete a surgery; however, it is advised that players carry each tool in case they are needed during the surgery.

The following messages will appear if the player has received a skill fail for a particular tool used:

Before conducting any surgery on a patient, all problems before the surgery must be addressed.

Once all of the issues have been resolved, the Surgical Ultrasound (or Med-A-Check for maladies) can be used to diagnose the patient. All steps shown below are to be performed after the Surgical Ultrasound (Surgical Lab Kit or Med-A-Check in some cases) displays the problem. If during any of these steps, the patient's heart stops, starts bleeding or any other problem occurs, these must be addressed using the appropriate tools before continuing. If the patient wakes up during surgery, Surgical Anesthetic can put them back to sleep. Should any skill fail occur, the step must be repeated (except for Surgical Scalpels).

The possible surgeries are:

During surgery, some patients may have special conditions on top of their problems. This makes it more difficult for the surgeon to perform surgery on and may have a higher chance of failing. They include:

Maladies are a type of disease that was introduced as part of the Blocktor's Orders! update on 13 June 2019.

Regular maladies can be randomly obtained while performing surgeries. A player can also get these maladies during the Surgery Day event, where upon logging on, every player will get any of the five, along with a special prize that is rewarded if successfully completed:

Vile Vials are consumables that can give a player a malady and will also have a chance of giving a Vicious Malady. If a player has vicious malady, this will be harder to perform surgery but can reward special rewards such as Doctor's Blingin' Set. This can be made easier if the player has a UV Vaccine equipped.

The possible vile vials are:

Upon completing surgery, the player will directly receive a prize. Some of the rewards are rarer than others. If a player receives a common prize, the player will also be rewarded with a Caduceus, which can later be traded in for items when calling the Sales-Man using a Telephone.

Among the possible prizes are:

If the player has successfully performed surgery on the patient, the patient will receive 100 gems.

There are also exclusive rewards obtainable from doing a surgery on a player standing on a Starship Sickbay Bed. The possible prizes are:

In the Doctors' Duel Daily Challenge (and its respective Guild Challenge), players compete to complete the most successful surgeries in two hours (50 points per surgery and -1 point per tool used).

Surgery Day is a monthly event where both the Malpractice (15 minutes instead of 1 hour) and Recovering (1 hour instead of 4 hours) mods are shorter than usual. The prizes that can exclusively be obtained during Surgery Day are as follows:

The Role Up! update was released on September 17th 2018 as Part 2 of the September Update. The update included roles that can be accessed through the /roles command. Leveling up specific roles will grant the player items. Each day, there will be a specific role that will give extra points and a Growtoken upon completing the first quest.

The following are the quests that can be encountered:

Steady Hands is the Surgeon Role bonus that can level up as the player progresses their roles.

The following items are earned as the player levels up their Surgeon Role:

To obtain the Dr. Title, the player needs to complete 3,000 surgeries while wearing the Angel of Mercy's Wings (progress is displayed in the description of the wings, for every surgery done, it counts as an Angelic Healing). This will add "Dr." before the player's name and change the color to red.

Below are the list of Achievements that are related to Surgery. 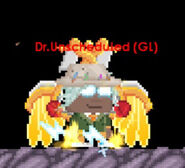