This is the page for Jungle Blast.

You may be looking for Weather Machine - Jungle instead.

Use this astounding device to create an entirely new jungle world. One free ziggurat included.
Properties
This item never drops any seeds.
Data

Jungle Blast is an unsplicable blast consumable which was added as part of The Adventure Pack Strikes Back! update.

Upon activation, the blast is consumed and a new world is created, resembling a jungle, with a background similar to the Weather Machine - Jungle. In the world, there will be always be an Adventure Item - Key on top of a statue which can be used to open the locked entrance of a spawned ziggurat, which will always have something on the bottom, which is an Adventurer's Whip, Minecart, Riding Gorilla, or a Wearable Ostrich. In a newly generated world, the following blocks can be found: 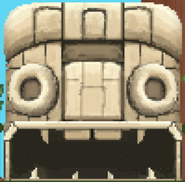