View source
watch 02:52
Roblox: DeepWoken - The Loop
Do you like this video?
Play Sound

One of the four basic blocks (along with Cave Background, Dirt, and Rock), Lava is an unsplicable solid lava pain foreground block which naturally generates in every non-blasted and certain blasted worlds. A lot of other blocks are essentially spliced from its seed, making it an important element in Growtopia. It can be found in the last four rows of a newly created world.

Being a lava pain block, a Lava knocks the player back and puts the player on fire until the player stops all motion when touched. A player will die after making contact with a lava pain block five times in quick succession (recovering from damage takes roughly 5 seconds), but a player with the Fireproof mod may take up to ten consecutive hits.

Quest For Fire requires the player to deliver 2,000 of this item.

The textures of Lava

Lava's original appearance, which was later given to the Lava Cube 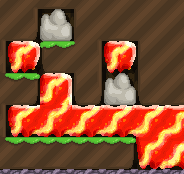 Lava and Rock generating naturally at the bottom of a world
Bahasa Indonesia
Community content is available under CC-BY-SA unless otherwise noted.
Advertisement