View source
watch 02:52
Roblox: DeepWoken - The Loop
Do you like this video?
Play Sound

A Legendary Quest is a quest that players can embark on to receive a legendary, untradeable item. To start a quest, players must be at least Level 40.

Legendary Wizard is an NPC who players can talk about their quest and deliver items. It can be made by splicing the Legen seed and the Dary seed together. The tree then takes 13 weeks, 1 day, 15 hours, 53 minutes, and 20 seconds to fully grow. Upon harvesting the tree, the Legendary Wizard will automatically spawn on the same tile that the tree occupied.

Legendary Title which gives the player a new name, appending of Legend to the end of the player's name and adding a special flag icon. The name fades to different colors. The name can be removed anytime for 24 hours by consuming an Apple or by unchecking 'of Legend' from the Title window which can be found by wrenching oneself.

Dragon of Legend, a behemoth purple dragon that breathes an unrivaled hell fire down upon the lands. Attached to a gold and purple sword.

Legendbot-009, a giant piece of mech armor that grants double jump abilities, and fires duel rockets rather than punching.

Quest Of The Heavens

Legendary Wings, a pair of huge angelic wings that grants the double jump ability and the Parasol effect.

Quest For The Blade

Legendary Katana, a large katana which has slashing effects.

Whip of Truth, a large whip that gives Secret Of Growtopia info when punching.

Quest For The Sky

Quest Of The Owl

Legendary Owl, an owl mask that summons a majestic owl that grants the double jump and speedy effect, and shoots golden feathers rather than punching.

Quest Of The Mech

Legendary Destroyer, a large robot the player stands on and grants Enhanced Digging.

When a player completes a Legendary Quest for the first time, they would've earned three achievements throughout the process. 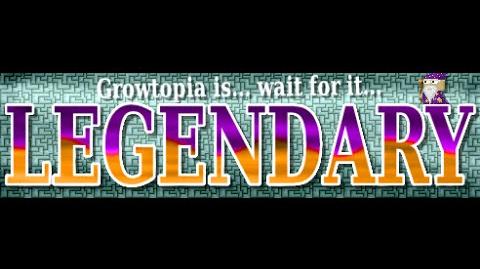