This wizard is legendary! Punch or wrench him to obtain Legendary Quests.
Properties
This item can be placed in two directions, depending on the direction you're facing.
This item never drops any seeds.
This item has special properties you can adjust with the Wrench.
This item can't be destroyed - smashing it will return it to your backpack if you have room!
This item cannot be dropped or traded.
DataPaint Preview

The Legendary Wizard is an untradable splicable non-solid NPC foreground block which was added as part of the Legendary update on August 22, 2014.

Players who have reached Level 40 are able to go on a Legendary Quest through the wizard. Upon completing a Legendary Quest, the Legendary Wizard will disappear and the player will be given their legendary item. 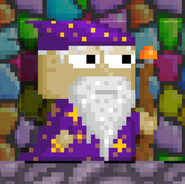