Think of it as a seed, only magic. If you plant it, you can use more Magic Eggs on it to grow it bigger and bigger. Break it anytime for a surprise! You can also splice it..... but with what?
Properties
This item never drops any seeds.
DataPaint Preview

The Bunny Egg is an unsplicable non-solid foreground block which was added as part of Easter Week 2013, while the Magic Egg is the Bunny Egg's seed. Magic Eggs spawn in worlds with at least one person in the world. The more people there are in the world, the more Magic Eggs will spawn there.

20-40 Magic Eggs may also be obtained from purchasing an Easter Basket pack from the Store for 10000 gems.

A Magic Egg works like a seed, which can be spliced with another eligible seed to grow particular trees. Unlike other seeds, however, the Magic Egg needs to be planted after the other seed to prevent it from becoming a Bunny Egg instead.

A Bunny Egg is created when a Magic Egg is placed or dropped on an empty tile. More Magic Eggs can be placed on it to increase its size percentage by 0.1%. When broken at some specific percentages, a Bunny Egg can drop an exclusive item. Breaking one at the wrong percentage will drop a random item splicable with Magic Eggs instead. 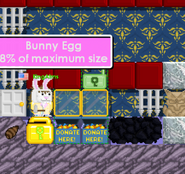 A player standing in front of a placed Bunny Egg
Community content is available under CC-BY-SA unless otherwise noted.
Advertisement