Ah, he just wants to tag along!
Properties
This item never drops any seeds.
This item can be transmuted.
Data
The Mini Growtopian is a leash, obtained by completing the Long Time Fan achievement (reaching Level 50). Upon completion, the Mini Growtopian will be added to the player's inventory, even if there is no space for it. 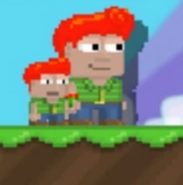 Player wearing the same clothes as the Mini Growtopian.

Player obtaining the Mini Growtopian.
Add a photo to this gallery
Retrieved from "https://growtopia.fandom.com/wiki/Mini_Growtopian?oldid=178740"
Community content is available under CC-BY-SA unless otherwise noted.