Whoa dude, major party fowl. You earned this for playing Growtopia for THREE YEARS, and over 300 hours, and reaching level 50! Wow, that's dedication.
Properties
This item never drops any seeds.
This item cannot be dropped or traded.
This item can be transmuted.
Data

The Party Fowl is an unsplicable pet hand item which was added as part of Anniversary Week 2017 on January 6, 2017.

When equipped, an orange-colored bird pet appears and follows the player around. The Party Fowl serves a purely cosmetic purpose. 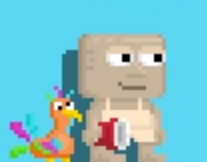 A player with the Party Fowl equipped.

The Party Fowl trailing behind a player.