Aww, so cute you just wanna snuggle him all day! But you should really pace yourself on that, with a trip to the burn ward in between each snuggle. No more than 500 of these little guys exist in all of Growtopia.
Properties
This item never drops any seeds.
Data

The Phoenix Pacifier is an unsplicable pet hand item which was added as part of SummerFest 2015.

The Phoenix Pacifier gives the player the Fiery Pet mod, causing the player to shoot fire out of its mouth, replacing the punch. It allows the player to punch further and breaks blocks like a Pickaxe.

When the player respawns, the pet will disappear into a ball of flames before spawning beside the player on the white door or checkpoint. 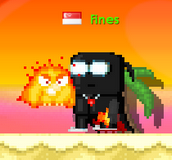 A player wearing a Phoenix Pacifier 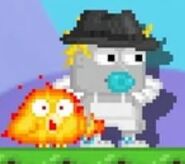 A player wearing a Phoenix Pacifier (2)
Add a photo to this gallery
Retrieved from "https://growtopia.fandom.com/wiki/Phoenix_Pacifier?oldid=187758"
Community content is available under CC-BY-SA unless otherwise noted.