Growtopia Wiki
Register
Don't have an account?
Sign In
Advertisement
in: Item, Clothes, Back (Clothes),
and 6 more
English

Is it hot in here, or is it just you? These wings let you double jump! There are only 500 in existence! Don't throw them away!
Properties
This item never drops any seeds.
Data

The Phoenix Wings is an unsplicable back item which was introduced during SummerFest 2014.

When equipped, the Phoenix Wings grants the Double Jump mod, which allows the player to jump a second time in mid-air.

Quest Of The Heavens requires the player to deliver 1 of this item. (or a Neptune's Trident)

A player equipped with a pair of Phoenix Wings.

The fire particles created when the player jumps while wearing them. 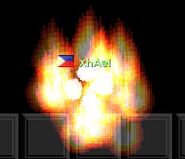 The respawn effect given by the Phoenix Wings.
Bahasa Indonesia
Community content is available under CC-BY-SA unless otherwise noted.
Advertisement