Start a Wiki
watch 02:35
The Loop (Games)
Do you like this video?
The one and only!
Properties
This item never drops any seeds.
Data

The Phonecats Hat is a head item given to Phonecats (Youtube: phonecatss), known in-game as pcats. The hat resembles the Phonecats logo. He was given it for helping invite people to play the game in the early stages of development through Youtube and live streaming the game.

The hat was given to Phonecats by @Hamumu, who left a comment on his video, leaving "thanks" and telling him to check his inventory. 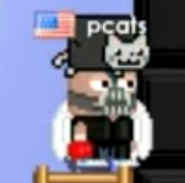 pcats wearing the Phonecats Hat 2013 (Old Design)
Add a photo to this gallery
Retrieved from "https://growtopia.fandom.com/wiki/Phonecats_Hat?oldid=153020"
Community content is available under CC-BY-SA unless otherwise noted.