Prince of Persia! Place this ancient lock and transport to the world of the Prince of Persia!
Properties
This item never drops any seeds.
This item has special properties you can adjust with the Wrench.
This item can't be destroyed - smashing it will return it to your backpack if you have room!
A lock makes it so only you (and designated friends) can edit an area.
DataPaint Preview

The Prince of Persia Lock is an unsplicable solid lock foreground block which was added as part of UbiWeek 2022 Day 4 on January 27, 2022.

As a type of world lock, a Prince of Persia Lock has all the basic properties of a regular World Lock.

When placed in a world where no other locks have been placed by other players, a world lock proceeds to lock the entire world, giving the owner full control over the world and a bright green name while they are in the world. By default, only the world's owner has access to modify the world, but they can add other players to the lock, who will then be given light green names, whereas the owner's name is of a darker shade of green. Players who have been offered access must first wrench themselves and accept it in order to be given the access.

Additionally, the Persia Lock transforms the world's background weather into that of an ancient Persian city-inspired scenery. 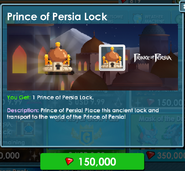 A render of the Prince of Persia Lock's background
Bahasa Indonesia
Community content is available under CC-BY-SA unless otherwise noted.
Advertisement