You were there, man. You were THERE when time rolled backwards yet again, the database burned to bits, and all the fruits of your labors turned to dust in your dry, bitter fist. July 2020.
Properties
This item never drops any seeds.
DataPaint Preview

The Rollback Plaque VI is a plaque introduced during the sixth Rollback. The block could be made by splicing a Cave Background Seed with a Sign Seed during the Apology Weekend that commenced on the 2nd of July, 2020.

On the 1st of July, new code was implemented that would permit for future updates. However, this code caused issues, leading some players to lose progress and the servers were quickly placed into maintenance. The issue with the code was fixed, however, player game progress was still lost. An attempt to rollback to prior to the release of the new code failed, leading to a rollback to June 30th 15:00 (Growtopia time).

Note: Server issues also occurred on the same day, failing to restart after a server crash. However, this did not affect the rollback. 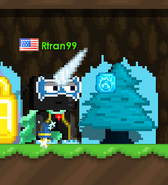