Anulot's bringing in the funk.
Properties
This item never drops any seeds.
This item cannot be dropped or traded.
Data

Saturday Wings is a back item added on the Orange Shirt update and released on the Artsy April update on April 1-2, 2016. This item was given exclusively to @Anulot as a token of appreciation for his contribution as a moderator.

When the player dances with the wings equipped, it will play a song similar to the Party Boombox. It will also grant a mod which allows the player to jump a second time mid-air. 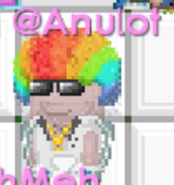 Add a photo to this gallery
Retrieved from "https://growtopia.fandom.com/wiki/Saturday_Wings?oldid=187201"
Community content is available under CC-BY-SA unless otherwise noted.