A cute little pet for you to feed and care for! They'll eat almost anything, but don't forget to give them water too. Use your wrench to change your pet's name.
Properties
This item never drops any seeds.
This item has special properties you can adjust with the Wrench.
DataPaint Preview

The Silkworm is a non-solid animated foreground block which was added as part of the Silkworms! update on February 1, 2016. 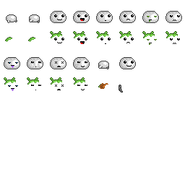 The textures of Silkworm

A deceased Silkworm
Add a photo to this gallery
Retrieved from "https://growtopia.fandom.com/wiki/Silkworm?oldid=193660"
Community content is available under CC-BY-SA unless otherwise noted.