View source
watch 02:40
World of Warcraft: Dragonflight - The Loop
Do you like this video?
Play Sound

This strange seed from outer space won't grow anything here in Growtopia. But perhaps you can splice it to infuse cosmic energies into ordinary items... Of course, any scientist will tell you that would never work without a source of cosmic radiation present at the time of splicing. (Translation: you can only plant or splice these during the Night of the Comet.
Properties
This item never drops any seeds.
Data

The Starseed is a special seed which was added as part of the original Night Of The Comet update on November 27, 2014.

A Starseed is used to splice certain exclusive trees during the Night Of The Comet, such as the Cosmic Hair, Rocket Pack, Unearthly Chemical and a range of other items. If the seed is planted by itself, it will drop a Starseed back upon harvest. 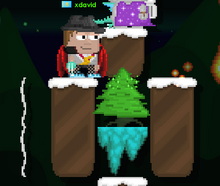