View source
watch 02:46
The Quarry - The Loop
Do you like this video?
Play Sound

Express your displeasure with performance in vegetable form!
Properties
None
Data

The Tomato is a splicable consumable which was added as part of the Rise of the Desert Dragons update on August 3, 2013.

This item can be consumed at any tile. When consumed on a player, they will receive the Saucy! mod, which turns the color their skin into red for 3 minutes.

This consumable can be fed to a Silkworm to give it a red color, thus allowing it to produce 1–10

A player with the Tomato's Saucy! mod 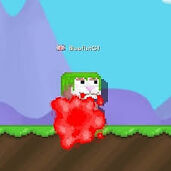 The red splat left by a thrown Tomato
Bahasa Indonesia
Community content is available under CC-BY-SA unless otherwise noted.
Advertisement