Turtle Hat is a head item released on the 16th of May 2013. It is available in the Growtopia Store for 25,000 Gems under the Awesome Items category. When worn, it leaves a trail of bubbles behind the player when they move around.

The Turtle Hat went through multiple alliterations before reaching its current state as a turtle hat. This was to avoid copyright issues, as alluded by the item description.

The first version of the item was the Nyan Hat, released March 7, 2013. The hat was based on the popular Nyan Cat Internet meme, a video featuring a flying cat with the body of a Pop-Tart and trailing a rainbow behind it. When worn by a player, the hat would make a rainbow trail behind the player, much like in the video.

In May 2013, Christopher Torres, the copyright owner of Nyan Cat, sued Warner Bros. for the unauthorized usage of the character. In light of this, the item design was changed on a whim to avoid a lawsuit for copyright infringement.

The second design was the Taco Dog, resembling a dog in a taco. The hat trailed the flag pattern of Mexico when worn by players, replacing the rainbow of the previous version. The item was fan-suggested, and while it seemed like a good replacement, it was soon discovered that the Taco Dog was also a character owned by Torres.

A poll was posted on the RTsoft Forums by Hamumu, asking the community what they wanted the hat to resemble [1]. The possible choices were Yerfdog, Piggy Bank, Turtle, Kitty, and Puppy. The poll closed on May 13, with Turtle winning with 45.12% of the votes, and the new design was rolled out on May 16. 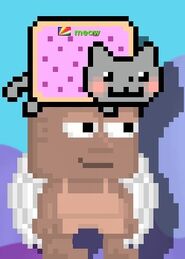 A player wearing the Nyan Hat and Angel Wings.

A pair of players wearing the Taco Dog Hat.

Turtle's Hat in the store. 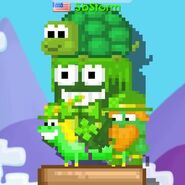 A player wearing Turtle Hat.
Add a photo to this gallery
Retrieved from "https://growtopia.fandom.com/wiki/Turtle_Hat?oldid=149867"
Community content is available under CC-BY-SA unless otherwise noted.