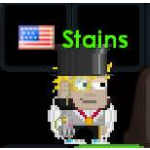 He is known in forums as Jlacson and in game also until he changed his name to Stains. Stains, is usually found alone farming, hanging out with friends or helping newbies and pros.

He usually donates stuff when the one asking for it has a good reason. He called himself as a "Prophet" on forums because of helping others even if theyll hate him.

Retrieved from "https://growtopia.fandom.com/wiki/User:StainsGT?oldid=28419"
Community content is available under CC-BY-SA unless otherwise noted.